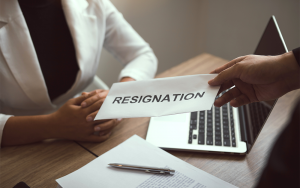 “Those days of ‘if you don’t like it, quit’ are over. People are every company’s No. 1 resource.”

Human resource professionals may want to stay ahead of a new trend that’s all the rage, brought on by a tight labor market and an inability to fill positions.

Rage quitting comes in various forms of intensity, but essentially, when frustrated employees feel overworked and underpaid, they’re walking out on the job.

“What we’ve seen has been maybe some angry words and frustration, but it’s typically just ‘I’m out of here’ and people leaving,” said Lisa Stefanie, president of TripleTrack HR Partners in Williamsville. “They’re walking off the job without really having a plan, because they know there are other jobs out there.”

Stefanie said the trend seems to be more prevalent in service­-oriented jobs, especially among personal healthcare workers, such as at-home aids or nursing home workers.

“People aren’t coming into the workforce to do that job,” Stefanie said. “There’s no hybrid work, you’re doing hard and physical work, and it’s costly for an organization to provide that service because they’re often getting reimbursed through Medicaid.”

The shortage of workers in the field creates a “domino effect” of quitting, she said, as workers and the folks responsible for scheduling shifts become more frustrated.

“People don’t do this type of job for the money, but they find themselves working longer shifts than expected because there’s not enough workers,” she said. “There are a lot of people on the cusp of quitting. They’re thinking about making a move, and they get frustrated and leave.”

Stefanie said she hasn’t seen a big number of people rage quitting, because companies are trying as best they can to retain people.

“They know it’s easier to retain folks than it is to replace them,” she said.

The national trend may not be as common in Buffalo, she said, since it’s a smaller market where bridges burn faster. New employers may reach out to a former employer and ask about how the relationship ended.

“In Buffalo, everybody knows everybody,” she said. “If you burn a bridge with someone that you work for, chances are they know several other people in the industry, and your name may have already gotten to that new employer to which you’re applying.”

“The more we can bring back the in-person things that help connect people personally, the better it will be,” she said. “To be proactive, the training needs to be about building a culture that doesn’t allow for someone to get really angry.”

Larry Mietus owns a consulting firm, Speaking of Strategy, in Depew. He said the labor evolution has been a long time coming.

“The seeds for this were planted long before Covid,” he said. “In a perfect world, people wouldn’t rage-quit their jobs; they would have a plan” – but employees have reached their limits in the last 18 months.

Employers have to be proactive by improving communication about the state of the business, its growth and any expansion or acquisition plans, Mietus said.

He also suggested companies send out short surveys on a regular basis to get a “pulse” on the workforce’s mood.

“If you look at the time it takes to do that type of surveying as opposed to recruiting, hiring and onboarding new people, it’s so much easier and cost-effective to retain that person who just needs to be heard, understood and appreciated,” he said. “Those days of ‘if you don’t like it, quit’ are over. People are every company’s No. 1 resource.”

Stay up to date on employment law changes, HR insights and ideas.